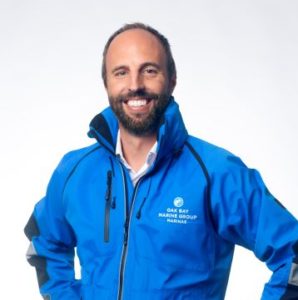 Brook started his career with this company twenty-one years ago; his exceptional leadership and communication skills, as well as his energy and enthusiasm for the business were recognized early by all around him. His attitude and ability have led to a steady progression of increasing responsibility, including General Manager of the Northern Resorts in Haida Gwaii (four fishing resorts at the time), and from there he moved to Vancouver Island’s east coast to eventually take over the iconic Painter’s Lodge.

Recognizing his strong contribution, our founder Bob Wright appointed Brook as the General Manager of Cape Santa Maria Beach Resort. Here Brook was able to execute Bob’s vision for the property which allowed the resort to achieve a Trip Advisor’s #1 Resort in the Bahamas and #5 Resort in the Caribbean.

Returning to Victoria in 2014 as the company’s Vice-President, Resorts, he was rapidly promoted to Chief Operations Officer and has been serving the company in that role for the last six years.

Brook has led the company through many changes, most recently the renovation and re-opening of our Ripley’s Believe It or Not! World of Adventure with tremendous success amidst the global pandemic.

As part of his continued desire to learn and grow this summer Brook will be completing his MBA at UVic’s Gustavson School of Business. He was also voted to serve on the Board for the Boating BC Association.

“I am thrilled that the company has placed its trust in me to lead the team forward. It really is an amazing company fueled by the ability and desire to deliver unforgettable experiences in oceanfront settings. This appointment is really the achievements of our leaders and crew and what they have accomplished as a team over the last six years. We have some exciting plans for this coming year and beyond and I look forward to continuing to serve our Crew and customers in partnership with our local and indigenous communities.” -Brook Castelsky